We come to you this week with a short, but important, second segment on Carnivàle. The sides of light and darkness have each been chosen, though the lines are arguably less clear throughout the series. In one of Knauf’s more brilliant moments, “light” creatures and “dark” creatures are never a cartooned version of themselves. In other words, they each exhibit and inhibit essential qualities of the other. Ben has a dark side just like Justin has a light side. Humanity tends to like paintings with broad strokes, essentializing and sometimes demonizing qualities of the other when in actuality we should be talking always in a multi-dimensional dynamic way about each other. Read on readers and see what unfolds in Knauf’s tale of Apocalypse! 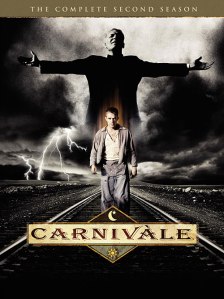 As season two opens, the audience is brought back to the story with the words of Brother Justin: “As God has tested Job, so too have we been tested brothers and sisters.” Knauf explicitly uses biblical references for his second season opener. This imagery of suffering, and of Job’s tragedy, re-centers the audience with an apocalyptic mind set; the end is coming. Knauf brings out the suffering of this time period well. As this opening episode, “Los Moscos, NM”, of season two progresses, the audience witnesses Ben in one of the nuclear bomb tests at Alamogordo, NM. When the bomb historically detonated, it was compared to something like the creation of the world or the second coming of Christ. As the bomb explodes in the series, everything is obliterated, but as the dust settles, Ben’s and Justin’s crouching figures remain. This scene serves not only as an apocalyptic tag for the series, but also creates a map within the storyline as Alamogordo will be Ben’s next destination. The result is the link of Ben’s journey toward Alamogordo, a place fraught with man-made peril, and ultimately one step closer to Justin, who represents the ultimate end. As Ben comes out of his vision, a character yells to him that he cannot run from the inevitable fight or millions will die.

Knauf also expands the apocalyptic and biblically related characterizations underpinning Brother Justin and Ben during season two. Justin, whom the audience first comes to know as a holy man, is rapidly changing into a demon. Uncertainty surrounds Justin’s true nature, however, until he addresses his ministry in a sermon,

“I now realize that you are not here to hear the words of other men. You are here for me. So that I am not alone in the garden. ”

After the bishops try to regain control of their rogue minister, Justin takes a stand and declares himself the snake to the people of Eden. Knauf has fully revealed Justin as the antagonist and the beast in his own Revelation.

The association of Justin as devil and Ben as savior is not only carefully written within each episode, but also works masterfully with the progression of three specific episodes in season two. Rodrigo Garcia, the director of Carnivàle, says of the two characters,

“Obviously one of the main themes is the conflict between good and evil… Another extremely interesting theme is the theme of identity. Both leads — Ben Hawkins and Brother Justin — they’re haunted by their powers, by their dreams. ”

The epic battle between Justin and Ben takes place in a cornfield in New Canaan. Both of the characters – Ben armed with a dagger, Justin with a scythe – draw blood from one another. Ben plunges the dagger fatally deep into Justin. Ben, also wounded, is soon dragged away by the carnival troupe for a quick getaway. As they pull away, Sofie walks into the field. The shot pulls out, and the audience sees the cornfield rapidly dying around her. In the final scene, Ben lies unconscious in Management’s trailer. Knauf’s final vision for Carnivàle leaves the audience with many questions. Sofie, who discovers her own ability to heal by touch, chooses her fate and heals Justin. Ben, who has no one to heal him, suffers in the trailer. There is no conclusion as to whether or not Ben lives. Does Knauf intend to show that the battle between good and evil goes on indefinitely? Is there hope for a new tomorrow? Clancy Brown, the actor who portrays Justin, summarizes the thematic heft of Carnivàle in an interview,

“This is the story of the final confrontation, between these two entities, the final battle between God and Satan, for the soul of man. And, well, we are the products of that battle. So, you decide, who won or who lost. Are we creatures of light, or are we creatures of darkness? ”

The ultimate ambiguity leads the audience into a frenzy of unknowing.