Game of Thrones better hurry up because True Blood is over! 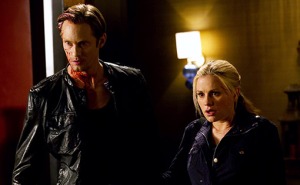 I know, Eric and Sookie, we’re upset too.

In our last True Blood article, we talked about hope and the purpose of belief in something, even if that something is not organized religion. I know I will probably not make too many friends by saying this, but there were parts of the True Blood series finale that I actually liked… a lot.

I mean, let’s face it, endings are hard to write, even harder to write so that everyone is happy. Endings to a seven season series on vampires, fairies, werewolves, demons, witches, shifters, and all other manner of mythical being – yet harder still. The truth is that no one really wants to leave Bon Temps, so having any ending is not going to give you the warm fuzzies. Stick with me here and I will explain why I found the ending to be, theologically at least, acceptable.

It only makes sense that when we talk about theology in an overt way in True Blood that the Reverend Daniels almost always has something to do with it. He is a “man of God” afterall. This time, however, it’s not Sam, but Sookie, that seeks his advice. See Sookie has a huge choice to make and it’s a choice that echoes to days past – “to be or not to be?”[1] The origin of that question harkens to days past to another writer who constantly challenged his characters in their decisions. Sookie’s predicament, not unlike Hamlet’s, revolves around acceptance of an unfair life versus becoming… well nothing. While Sookie is not looking to kill herself, she is contemplating getting rid of an essential piece of herself. Should Sookie aid in Bill’s death and ultimately render herself powerless – a normal human being?

I am not going to tackle the “to kill” or “not to kill” ethical dilemma here, which would be made even more complex by dealing with an already dead vampire. Rather, I want to talk about Sookie Stackhouse, who she is, what she is, and her decision about what to become.

Sookie lived few decades of her reality not knowing, in name, that she was fae. She knew she was gifted, as did everyone around her, and knew that that made her different. While she didn’t have a word to put to her gift Sookie had a center – a piece of self, recognized by herself, that she held at her core. Maybe it was her soul, maybe it was just her essence, the being of Sookie Stackhouse. In fact we all have that piece, the evidence that makes us recognizable to ourselves as ourselves. Sometime through abuse, trauma, and tragedy, that piece can get damaged, but it is always there – still – at the heart of the self. Sookie, in her decision, risked losing that vital core. On the other hand, she loved Bill and sometimes sacrifice is also vital when helping and caring for those you love. She contemplated sacrificing herself for his demise. Sookie sought out the Reverend Daniel in order to get some advice on the subject.

Sookie: Do you believe that God made us all as He meant us to be, or… do you think that some of us are just… mistakes?

Rev. D: I heard about all you’ve done for this town, and believe it or not, Sookie, most folks are saying we wouldn’t be here 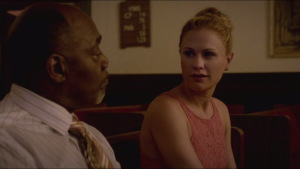 without you. How can you think for one second that you’re a mistake?

Sookie: But what if I just want to lead a normal life? What if I’m tired of being what I am? Am I sinning against God if I decide not to be?

Rev. D: Now hold– hold on a second. Are you saying that you can un-fairy yourself? Oh, that’s another story, then, because, yes– yes, I believe we are all as God made us, but I also believe He doesn’t have to lead our lives and He doesn’t have to walk in our shoes. What I’m getting at is God wouldn’t have given us these amazing brains we’ve got if He didn’t expect that, at some point, we were gonna start using ’em to make our own decisions, to exercise our free will.

Similarly, in a flashback to Gran, Gran told Sookie in reference to having a “normal” life and family,

“Stop it! I don’t want to hear you talking like that. You can have any kind of life you want. You can persevere. Anything you want, Sookie, you are entitled to it. There are no limits on you if you don’t put them on yourself.”

In the end, Sookie couldn’t do it. Giving up her light, her essence, was too much, she had to be herself.

Aside from the conversation with Reverend Daniels, there is a theme running throughout the series from Lafayette to Steve Newlin that God makes, God creates, as God sees fit. In other words, God doesn’t make mistakes. On the surface that could be a problem, would that indicate that 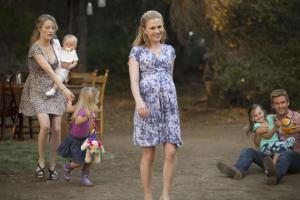 we should never seek to change any part of ourselves, physical or otherwise? Well, no. Many theologians have written on the gifts that God gave to humans to be able to come to know and love themselves and others. It is reasonable – reason being one of those gifts – for someone to feel that their essence is one way or the other. Sookie felt that she was a fairy, she also felt that she wanted a family and what she deemed a “normal” life. I don’t feel that Sookie was defined by her choice, her pregnancy, or her family life. I don’t feel that the writers threw everything away for the standard American family in this instance or that, when she wants to be, Sookie is any less of a badass fairy than she was before. I do feel the need to acknowledge Sookie’s choice and the affirmation of what she wants, even if she is only a character, as that choice is essential to being human and to affirming the self that God created. I would be equally supportive is she had chosen to become a lesbian and live in a hippie commune with Ginger, but that was not her choice – at least not as it was presented to the audience.

The importance of this episode can be summed up in three steps.